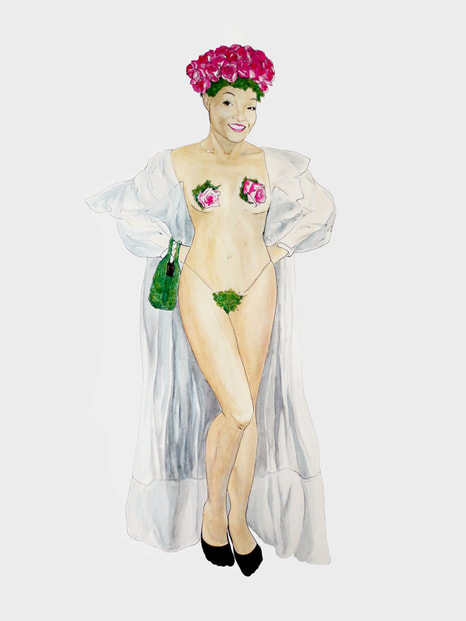 How would you describe your occupation?
My job is making the ordinary extraordinary, that’s kind of been my job since I was about 17.  I get to go into different rooms and be the light in that room and be that live energy and I’ve been paid well for it. It’s not as practical as math; sometimes you get different talent cards in life.

I’ve had my head shaved since 1986, it’s like being a blank canvas and I can paint it in any direction. I was in an article in ‘87 with a shaved head about scene makers. It was about how my friends and I,(now half of them are dead) would show up at a nightclub or wherever and make a scene happen.  You are like this light bulb and you brighten up every place you go.

I was Blue Lady, an icon for a computer company.  This was right before the bubble burst, I didn’t get out of bed for less than a thousand dollars.  The theme was to get used to the unfamiliar and I was the icon, painted in blue with a shaved head and ice cream cones on it.  I was the only Blue Lady in the world.  I would go to a lot of their conventions and they would fly me to their branch offices to pep up the workers in their little Dilbert cubicles.

At another point in my career  I was trying to fax a Hollywood agent and my fax went to the wrong agent and L.A. is so new age he took it as a sign.  He had an idea for a bald girl and so they flew me down to San Diego for Comic-Con and turned me into a comic book character, you never know what’s going to happen.

How do you get inspired?
My best friend Arturo who I knew for over twenty-five years and who died in August.  He also was nominated and won most notable drag queen this year. Arturo and I realized there was this thing that we both did as kids where we would take a skirt or shirt and put it over your head to make a habit and pretend to be nuns. There is a whole lifetime of playing with everyday objects and when you use your imagination you can transform it.

Now I’m inspired by the events I go to.  I went to Rex Ray’s memorial and I wore one of his hearts and on my face and I painted his teardrop shapes but to the side because it was more like tears of a clown, both happy and sad which was a reflection of him.

This year I was asked to present best gay bar for the Nighties (the night-time music awards) and I wondered what I was going to wear.  The movie du jour is Fifty Shades of Gray so I used the handkerchiefs in my bustle to signify the fifty shades of gay, referencing the gay the handkerchief code.  I used to be afraid to wear a handkerchief because I was like what am I saying, and what are you going to do to me?

I did pirate drag for a Clammy Faye event and I borrowed an eye patch out of my sons’ drag box that I used as a pasty and I played off of the idea: you are the one I (eye) love.  Actually the first time I dressed as “The One Eye Love” was when I was dating Chris Isaac and he had a song and one of the lines was you are the one I love.  I always thought that was kind of funny because there is a fetish for girls with one eye.

Do you make most of what you wear?
Not all the time, sometimes it’s combination of bought and made things.  For me getting dressed is just like do-it-yourself wrapping paper.  Clothing is like wrapping paper and you are the present, so you really have to take care of the present that’s why I do Bikrim Yoga and Barre class every day non-negotiable.

One year for Halloween I dressed my baby son Maverick as a maggot and I was a fly. I made the fly eyes out of strainers and the rest of the head was made out of theatrical noses.  Anything can be incorporated in an outfit.

I altered a Snuggie with a kilt pin and wore it to the punk rock reunion, I’m younger than a lot of the punks but I know them through creative circles so I went to the reunion.  Part of the Snuggie is the sarcasm, its so cheap and gouche but you can make Snuggie Courtier.  You can come up with drag out of anything!  Dressing up makes everything appear more interesting especially if you’re recording it, and it allows me to go where I want to go.

When did you move to the city?
In the 90’s, I am from San Jose but I had been coming up here since I was 17 and now I’m almost 50!  I always came up here because it was more exciting and I loved going to the thrift stores, I could get a dress for $1.99. I met the fashion princess Gloria von Taxis at DV8 and I remember I was just wearing  $1.99 dress but because of the way I put it together she was like oh wow, and had to ask me questions about it. The same thing happened to me with Betsy Johnson, I was at her show wearing something I got at the thrift store for $1.99 or $4.99 (big spending) and I remember the next season looking at her fashion line and seeing the outfit I had worn to her show. This has happened to me several times throughout my twenties where I would meet fashion designers and then see my outfits in the their collections.  Then I lived with a fashion designer, my friend Jeff who would often pattern something off of the things I found.  A lot of things you can trick up with a corset and a bustle.

How did you get involved with the drag community?
I’ve always attracted gays and drag queens, being a person that likes to dress and play.  Drag queens are genius illusions, they seem surface and shallow but they are the most genuine people I know.  Arturo was the youngest of nine and he looked up to his oldest sister and her prom dress.  Of course when he was home alone he was always trying it on.  My friend Joshua was obsessed with Mary Poppins and he wouldn’t take off his ice skates because those were his Mary Poppins boots.  Michael Benbrook who was one of the most fabulous drag queens also pretended to be Mary Poppins and broke umbrellas jumping off the roof trying to fly like her.

How did you meet your husband?
He was my neighbor, I had comps to go see a show at the Castro Theatre and Arturo and Jeff couldn’t go because I used to always go with Arturo.  So I asked my friends Timmy Spence and Pippi Lovestocking to go, kind of scary drag queens, love them, but you know.  I had an extra ticket and I asked my now husband to come, this was our first accidental date and he wasn’t scared of them, I kind of knew then, it’s like the Spice Girls sang if you wanna be my lover, you gotta get with my friends. We got married on top of a big huge wedding cake we made ourselves.

How is it being a cis woman with kids in the drag community?
Before kids and hanging out with drag queens I was always very nurturing, I was born with a nurses hat and an apron on. Now there is creativity with my kids.  They shaved their heads for their Halloween costume, they wanted to be the Last Air Bender.  The apples didn’t fall that far.

Other PTA moms don’t have this problem worrying about their costume for the Mardi Gras school benefit party, I wore baby bottle nipples as pasties and beads.  For the kids’ preschool prom themed fundraiser I decided to do Carrie with red paint and a 70’s slip.  5 women came up to me and said they thought of being Carrie but they didn’t do it, I have the follow through.  I think of it and I get there.

How do your kids feel about your costumes and performances?
Well if you have teens you are not going to be cool no matter what. But most moms aren’t buying hooker boots either.
​