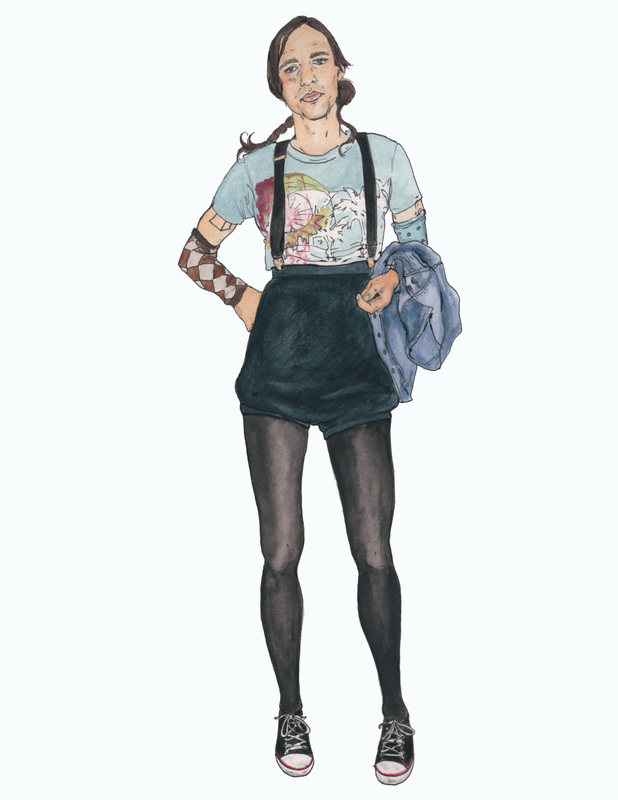 What is your occupation?
Serving rich people. That’s what I do for a living. I don’t make any money off my art.  My art is the way I am trying to speak to what I care about to the public and to create a conversation about the reality of my life.  It is the way I’m trying to fix the things I’m unhappy about and make something colorful.  I would like art to be my occupation but I’m not sure how that works.

What are some themes you use in your artwork?
Revolution in terms of spirit and wanting to turn people onto the idea of a better happiness than the one offered up in the public sphere.  Like a more interesting sexuality, food, music and a conversation of spirit love between one another.

What is your inspiration?
I take inspiration from people that have a hard life but make it look easy, people that can be classy under stress and get their work done against the odds.  People that have made good lives for themselves and helped a lot of people out.  People who are surviving outside of the system, people who have overcome adversity and people who’ve made something of themselves, because it’s really hard to figure out how to do that.

What is your style inspiration?
Feminism is a big inspiration for me; I would like to be an out feminist.  As a man I was never comfortable with the hateful murderous language of men speaking with men about life in general and it’s really important for me to be identified outside of that so I can have some footing just to be myself.  So stylistically I would like to be acknowledged as different.

How do you find living in the city as an artist?
Really tough.  For the entire time I have been here it has been completely un-facilitated by the city.  I’ve lived in the cracks the whole time basically hustling more than having it easy.  This city’s priorities aren’t about artists, families or children, it has been a money making game since I moved here. I’ve been here for 20 years and this is where I’ve made my name to make money, I’m not sure where I would go at this point to start over. I’m thankful to have a little bit of something right now to feel safe.

A lot of what I’ve done in the city is barter with landlords for space.  I fixed up a man’s storefront for a two-year lease.  It’s been great to get my life together, to pay bills and take care of my health.  Now I’m a year into that lease and thinking about what I’m going to do.  I’m proud to be who I am and live the way I live but I want to raise my living standard.  I see a lot of the people around me dying in poverty. I don’t want to become rich and leave my people behind, but I also I don’t want to spend all of my money on rent and a shower.  I’m very privileged compared to a street person.  Speaking out costs a lot of money, it’s hard that’s why people don’t do it.

How are you speaking out?
Mostly just through the art that I do.  I’m interested in practicing non-violence, I’m not the best at that, I grew up in a rough culture and that carried through to my life in San Francisco.  I live as a general activist in whatever degree I can; I participate in benefits and am conscious of where I go, and where I spend my money.

What neighborhood do you live in?
I’ve lived in the Tenderloin for about 10 years.  It’s really unpleasant right now; a lot of people that I felt like were my community, that I enjoyed seeing around have been finally pushed out.   I used to really enjoy the neighborhood, I regarded my existence here in an 8-block radius the safest in the country, and it’s a lot less safe for trans people now. I have a sense of loss daily.

What do you think would make the city better?
I think the government could try to bring it back by prioritizing families, and diversity.  Instead of building 15 high priced lofts, change that into 30 to 40 units of medium income and family housing.  Prioritize the workers; everyone that is working here is just working way harder than they need to.  We are appreciative of there being work but it’s just ridiculous.

What is your favorite thing about the city?
So many things, I love the location, I love the sensibility of the natives of San Francisco from all walks of life and I like that there is a common thread through a lot of different diverse nationalities of people that’s been developed over the many years of working with each other.  I have had a lot of different types of people be my main supports here.  The arts community has not been my main support whatsoever; they are not interested or worried about that.  But working people have really helped me out here more than any educated group.

What is your favorite neighborhood?
Visitation Valley, there is something sort of calm about it.  It’s just a little more working class and there are a lot of different types of people out there but they just get along.  When I’m out in San Bruno and Visitation Valley the pressure and stranglehold is off, it’s a little more relaxed.

What has moving here done for you?
I wonder about that. The queer foundation is why I came here; I came here to be out and for safety.  Before I came I was absolutely crazy and hadn’t had any sense of a possible community, I was very alone and mentally struggling. The queer folks that laid tracks before, that spirit and their ghosts directed me a lot.  Working people, people that are here to hustle taught me how to behave.