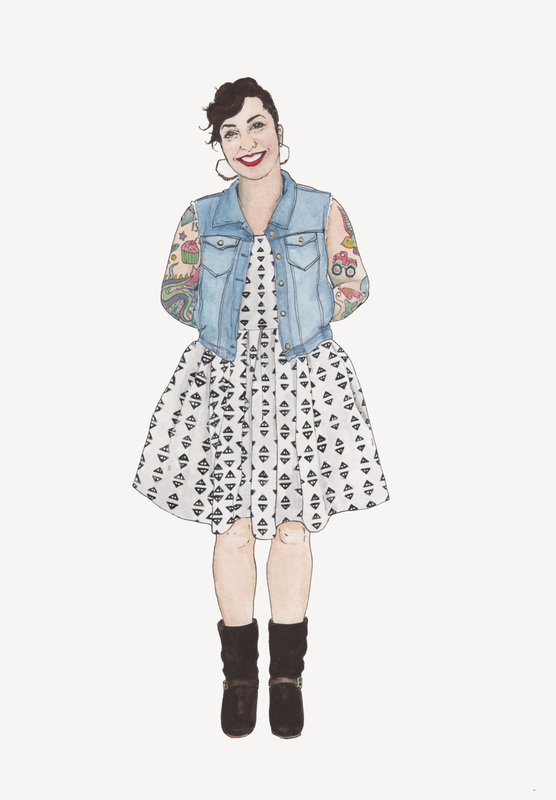 How long have you lived in San Francisco?
Nine years in January so almost ten years.


What brought you here?
I moved to LA in 2000 with my sister and then she got a job in San Francisco so I made a decision to move here and within 48 hours, I found an apartment and a job and made it work. When I came here as tourist I bought a scarf and I remember I felt like I could be a lady who wears scarves and live in San Francisco. It was the possibility to be whoever I wanted to be and I had never felt that before.

How have you found living here as an artist?
Incredibly inspiring and supportive and I have such a strong crew of female artist entrepreneurs; it’s been really good.

How long have you been doing photography?
When I started, I had a point and shoot and I did things like landscapes and flowers. Then I was given a real camera by another photographer and a friend was like, Would you take a headshot of me?” and I was like, “What’s a headshot; why do people need these headshots?” I didn’t get it. That first shoot was really hard because this person was slightly difficult, but I thought I was good at it because it was a fun experience. So I just started practicing more and more and realized that there was this whole market and no one was filling it. Everything else was stylized, in a studio and corporate, and that really wasn’t the vibe that people wanted. I started working with queer artists and poets and stuff like that so I just built up from there and then slowly started charging money to do it. Portraits surprised me, but it’s because I love people and I can help them feel comfortable and ground them.

It was two years in August that I have been doing photography full time. I did it secretly for a year and a half before that. I would sneak out of my day jobs at lunch to photograph clients and built up my name so that I could quit. It took a lot to quit my last day job because I always thought I would have to have a day job and health insurance and a 401k. And finally, one day, my wife was like, “You come home and complain about your job every day. Why are you still doing it? You should quit.” I felt like I couldn’t quit, that no one was going to pay me to do photography full time, but then it happened.

How do you find your clients?
The first year of my business I quit my job on a Friday and on Monday I was featured in Daily Candy and that set up my clientele for the first year. During that time I was also building up on Yelp and doing a lot of research on search engine optimization and how I would pop up on Google searches. I would say Yelp, Google, and word of mouth are the three big ones.

Can you tell me about your Identity Project?
The Identity Project is a series of portraits where LGBTQ folks define themselves by using a certain number of terms. I put a call out on Facebook and thought that I could do maybe fifty photos. But within the first month, I had like 250 people wanting to be photographed. It was overwhelmingly amazing and the way that it kind of caught fire online just showed me that there is this huge void, where there has never been this opportunity for queer people to define themselves on their own terms and be proud of their photo being shot by a queer photographer, so it was really fun.

What terms would you use to describe yourself?
Tenacious,(my wife gave me that word), creative, and driven; those would be my three words.

Do you have any photographers that you look up to?
With the Identity Project, I had a lot to prove in terms of being an artist because I felt like I was a business owner who took good photos. I’m a creative person, but because I’m self taught and I didn’t go to art school, I’ve never thought of myself as an artist. There were all these queer photographers doing stuff that I was definitely inspired by like Ashley Kolodner in New York who does Gay Face. iO in L.A. was doing We Are You and Meg Allen was doing Butch in Oakland.

How did you meet your wife?
A typical lesbian story—I was at an ex-girlfriend’s housewarming party. She said she knew from the moment she saw me at that party that I was the one; it just took 3 or 4 years for me to figure it out.

What is your favorite neighborhood in the city?
If I could buy a house, ha ha, in the city, it would be Duboce Triangle. I think that is just a magical centralized location and there are flower shops and the park and good burritos. But I have definitely fallen in love with the Outer Richmond. I am on 26th Avenue now, across the street from the park. Being close to Sutro Baths, Lands End, and Baker Beach—I didn’t even know that part of the city existed, I am out in the city every day with different clients and Hayes Valley is one of my favorites right now because of the variety of colors and textures and walls and the energy. My super fashionable clients always like being down there because they feel like they don’t stand out. I love Hayes Valley and seeing how much its changed even in the last year.

Do you have a favorite event in the city?
Well the Dyke March is always one of my favorites. As I get older I try to experience it differently every year. This year I had drinks and dinner on 16th and hooked up with the march as it went by. But the Frameline Festival was really important for me for many years.

How do you feel about the changes in the city?
It’s hard. I mean I am definitely benefitting from the influx of tech, but I think the heart of the city is gone for me. When I go to Oakland or Portland, it feels like San Francisco did when I first moved here. Being down in the Mission, it’s just so different. It’s displacing all these people that were so creative and putting their art into the city and now it’s being replaced with technology; it’s kind of sad.

How would you describe your style?
I love dresses with pockets, anything that’s comfortable. I feel like my hairstyle right now is allowing me to be a little more punk rock, which is fun. As I get older my fashion gets more ridiculous because I just feel like I don’t fucking care the way that I used to. Recently I bought a pair of pink converse that make me so happy because I had a pair in fifth grade.

How are you funding the Identity Project so you can go to different cities?
I raised ten thousand dollars in May. That was really hard and overwhelming to ask people to support my art, but they did and it was incredible. So I’m traveling using those funds. It’s crazy to be able to do this and meet a ton of people. So far, I’ve done Portland, New York, and Chicago, which were all really fun. I am still figuring out my destinations for 2015.

You know what’s cool is that there is a French photographer and they did their own version of the Identity Project in France. They contacted me and asked if it was cool and then they got all these people and came up with their own terms and it was really neat. And there is this artist in Australia who is doing wheat paste pictures of my photos in her style and now they are up in the gay neighborhood on the walls and telephone posts. Also lesbians in Russia ate the project up; it was interesting to see who needs it and what conversations are out there not happening. All of these great people from the Huffington Post, Curve Magazine, and Jezebel were asking for interviews and I prepped myself to give a good press interview. We’ll see if another round comes.

I feel like I didn’t figure out what I wanted to do for so long that I have a lot of time to make up for.