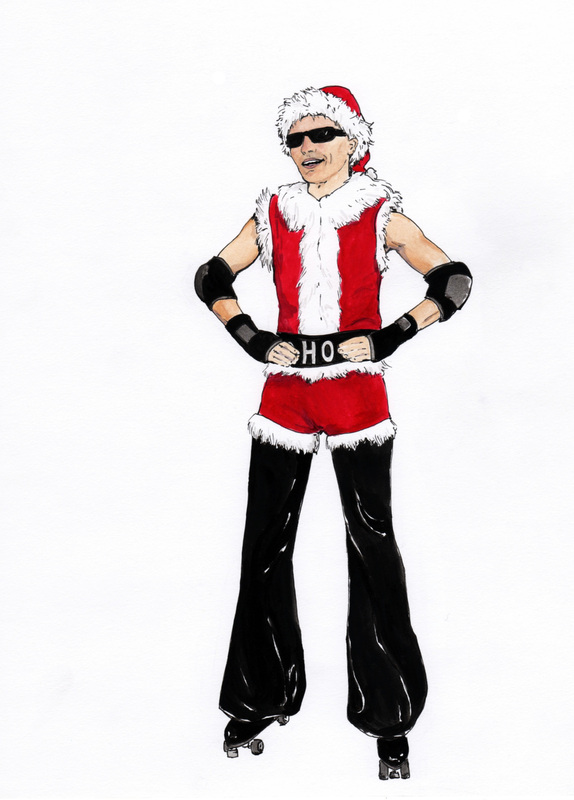 I'm a robber of reactions and I like to steal smiles.

When did you start making costumes?
I’ve been making costumes since I was young, it comes with the territory of being born the week before halloween.  Then when I started skating again, I rollerized all of my costumes.

What is the inspiration for your outfit?
“I'm kind of like santa’s helper, but I’m like an accountant temp worker, a serf, and the budget goes out of control.  theres been sequestrations in Santa’s budget, with most of it going to the 1%, he’s in the red, he’s always in the red, he’s going to have to outsource the toy shopping to american parents.  they;ll have to buy gifts for santa.  I get 15$ an hour and all of the cookies i can eat.”

Why do you like to skate around in costume?
Is it a message or is it just fancy fitness?
I’m interested in exploring the power of presence in public places and its effects of evaporating peoples’s minds.  I’m here to interrupt the commercial.

What is your style inspiration?
When I first moved here there were a lot of local personalities. There was a woman who wore all white, and there was a guy who wore a pink unitard and rode a pink unicycle.  I thought about having a single identity for myself but I’m more of a shape-shifter.
I’m kind of like a hummingbird, I come up in front of a restaurant window and pass by.

What are your favorite places in the city?
I like to go to Baker Beach on an odd weekday. It’s a million dollar view and there’s no one there.