Interview with David and Michael 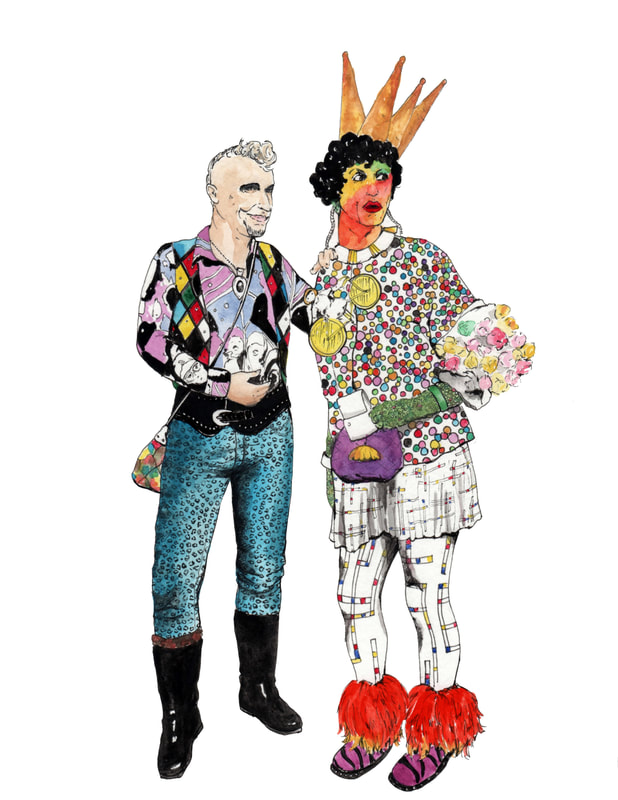 David: “Being responsible for your own good time is very San Francisco.”

Michael: “We’ve managed to create something dynamic. We don’t have a big message, we just aren’t fucking gone.”

Occupations:
Michael: I’m a photographer but I use the term visual artist because I’ve done everything from puppets, writing, community work with the AIDS quit when it first started, I’m a jack-of-all-trades.
David:  I started out as a painter but I am really a visual artist as well, business was always the drag I could not do.

What is your style inspiration?
Michael:  I like visual eccentricity.
David:  We love the odd ball, but it’s a dying breed.

What is your favorite designer?
David:  Mrs. Vera (our collective drag persona) is named after the designer Vera from the 60’s and 70’s who always had great prints and a big color palate.

How would you describe your style?
Michael: I don’t dress in traditional drag, I like to be more masculine.
David:  If the thought occurs to me it’s worth doing.
Michael: We kinda look like we stepped out of a circus.

How did Mrs. Vera originate?
Michael: A lot of art about AIDS is dark, I don’t want to be remembered like that. The isolation that comes with any disease, your world shrinks, I was just kinda trying to make my world a little more of my world.
David: When I met you, you were supposed to be gone shortly, the prognosis was not good for a lot of people.
Michael:  One Tuesday I said to David ‘Lets take pictures and dress up’ because it reminded me of the people that I knew.  I call it sensory restoration, its symbolic of how you don’t let things take away, maybe you overdo it trying to retrieve, the concept of Mrs. Vera is that she is wearing the things that all these people (that died) had, that’s why she is wearing so much stuff, she’s like a drag tornado.

What is your favorite Neighborhood?
The entire Golden gate park, it’s our favorite place to take pictures.

On pride parades:
David:  A lot of the drag queens didn’t want to go to pride. Who wanted to celebrate, who wants to go to a parade at that point?  But we thought we are going to go anyway.
Michael: At one point metaphorically I brought all of my friends with me in my head. I like the pride parades here because it’s a tribute to the people who are no longer here.
David:  It was defiant in that time(during the height of the aids epidemic) to dress up and pretend to be happy have a good time.
Michael: And we had a good time. We had sixty people this year, we started twenty years ago with five.

About Verashpere:
Michael: It’s such a departure from drag, David makes these incredible costumes all made out of recycled materials.  People think that the pride parade is boring, but why don’t you make the parade a little better, it’s challenging there is no space to make a float in the city, so we sort of wear our float.

On the current rental hikes and evictions:
Michael: I don’t feel like a victim but we lost our art studio, we had it for a good twelve years and then they wanted twice as much money, I’m not bitter about it but we couldn’t afford it anymore.
David: Now anyone can get evicted anywhere at anytime, even people with real jobs and it’s the second round. Oakland is a city that is hard to see any change in so in a way San Francisco’s lost is Oakland’s gain.