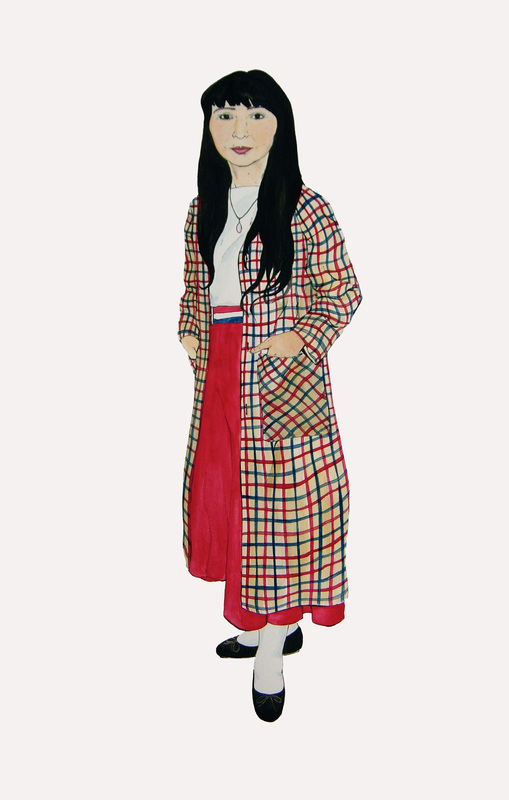 
I can usually sew a kimono in one day because I can sew kind of fast.  Japanese sewing does not have a pattern, all kimonos are almost the same you just measure the back of the neck to the ankle plus one foot for the folding.  You fold it at the waist first and then tie it and then fold it again and then tie it.  Cotton kimonos are easier, no lining just cotton, at the time 100 dollars was professional charge so I would say fifty dollars ok ‘ll do it.  Now my son loves sewing, he even made a jacket.  He has a style I always call ninja, always wearing black and grey.

What was it like for you when you first moved here?
When I moved here I was a student at a small local school studying English.  The best thing for my vocabulary was the OJ trial, you know OJ Simpson. They were speaking in the court using language I cannot hear usually so I brought a dictionary by my side and would look up any of the words I didn’t know.  So T.V. was a good teacher for me at the time.


I had only one kid when I moved here she was five years old came to the Montessori school for first grade but after the fourth grade I put her into public school. Then I met my husband, he was working in my apartment building, it was a big complex, five or six buildings in one place.  Now he works at Roosevelt Middle School as a Paraprofessional.

Do you have a Japanese community here?
No, all of the old traditions are still strong here and I don’t want to do those things.  Such as when a couple goes somewhere together the husband always goes first and the wife always has to follow him, always wearing kimono dress. There are a lot of rules that people have to follow, rules about how they have to drink, sit, everything has so many rules and I don’t want to follow them.

Do you have inspiration for the way you dress?
I always have red skirts because I like that style because it’s like the people working in a shrine wearing red pants and white on the top, some people say that never goes out of style.  This necklace is my design; it’s like witchcraft, Rose Quartz. I like its color. This jacket is from when I was seventeen; I haven’t changed my size since I was seventeen.
I sew my clothes by hand. Hand sewing is fine but I don’t like using the sewing machine.  When I make a skirt the first day I only cut it out and the next day I sew two parts of the skirt and the next day the other side and the belt. So maybe it takes me three or four days.  The problem is that the bottom is too wide; it’s so long to do the hem.  I have a special needs child and she sprinkles a lot of things on the floor so I have to open my legs wide to pick them up, so it is not easy to use a tight skirt.

What is your favorite place in the city?
You know where Market turns into Portola Drive, I like that especially at night, it has a nice view.  Also I like Ocean Beach in the evenings, the sunsets are so beautiful.

Tell me about your involvement in the fashion world in Japan.
I used to be a hat model as a child in Japan; they liked me because I had a small head and a long neck.  Later when I was 24 or 25 in Japan somebody recommended me to write for a fashion journal for a couple of years.  I met a lot of designers; the fashion shows were fun but behind the scenes were kind of ugly. There were lots of hairstylists, models and tons of sewing machines and up to a minute before the show they were using sewing machines on the clothes right before they went down the runway.  Before I became a fashion journalist I believed that everything would be done and all of the clothes would be hanging up and the models would get their make-up done and put their costume on and go.  But the designers were back stage saying this is not right, do it one more time.  I wanted to be a designer when I was in my twenties but I was kind of disappointed by the job and I lost respect for the industry and thought maybe I can do it for myself and not for sale.
In addition to her fashion career Mesae is a composer.
I have been studying music since I was three. I started with piano in music school then I came here and in ‘97 my husband’s father sent us a student model flute, it was stuffed in a cousins closet and no one had ever played it.  It was brand new except insects had eaten the pads behind the keys.

Now I compose popular style music for flute, usually the main instrument is flute and then I also include the bassoon or obo.  I practice 6 hours a day, 2 in the morning 2 in the afternoon and 2 in the evening.  I don’t want to perform personally but people perform my compositions at the concourse by the Academy of Sciences and other small concert halls.