Interview with Kyle aka Vivvi the Force 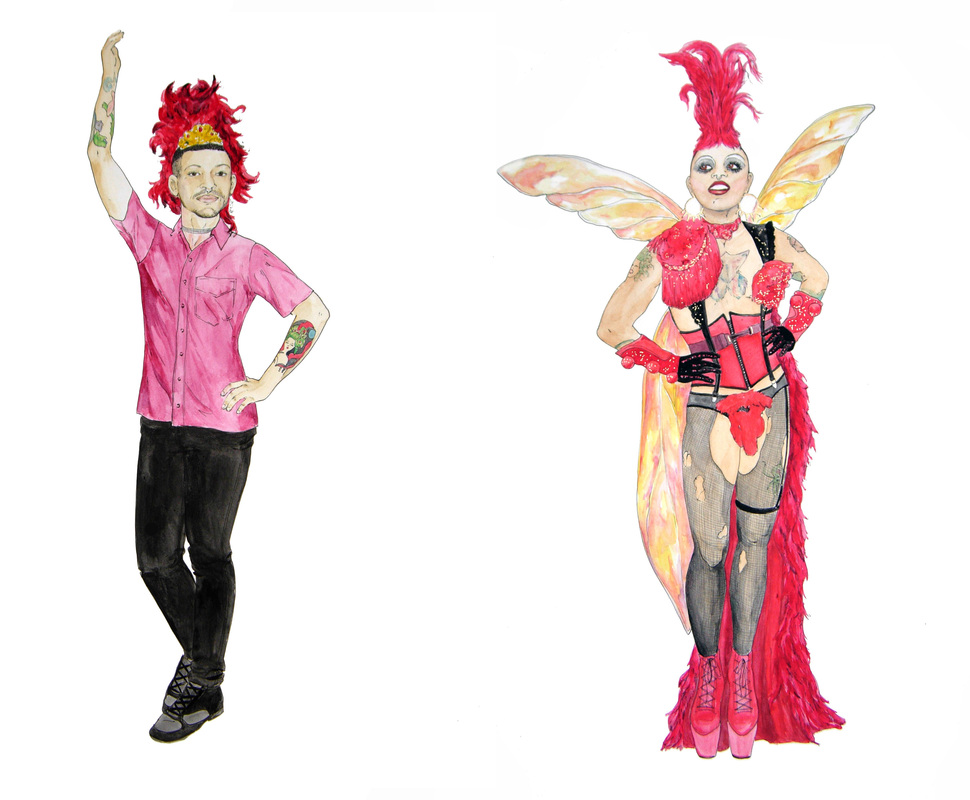 How long have you lived in the city?
I moved up here last June from San Diego.  I grew up there and I was ready for a change.  I walked out of my job on my lunch break; it was a shitty nursing home.  I packed my bags, found a hippie ride on Craigslist to start a new life, a San Francisco life.

How has your San Francisco life been?
It’s been good, it’s challenging but for every one thing that happened in San Diego there are ten here, one day is filled with activity.

How has it been challenging?
Financially, that's probably the biggest go of it, trying to secure yourself and get Maslow’s basic hierarchy of needs: shelter, food, and water.

What is your occupation?
I work three jobs; I work at Shauplatz, Costumes on Haight and at a doctor’s office as medical assistant.  So this morning I assisted in a pap smear, I drew blood from three people, I gave flu shots and then came here to the vintage store.  I’ve done a bunch of stuff in the medical field.  I like mixing it up; I’ve worked changing diapers, doing home care and as an activity director at a senior center.  At the costume shop I’m in charge of lashes, stashes, glasses, and tiaras.  It’s a fun place to work but sometimes people come with ridiculous requests, they want to be a sexy ninja turtle and it’s like that's just not gonna happen.

Has living in the city changed you?
I have grown a lot being here. You experience so much here and you have to adapt and change.  I also do drag and Vivvi has been able to do a bunch of stuff and grow as a character.  In San Diego the kind of drag you can do is pretty confined.  Up here is just so artsy and people can do whatever the hell they want.  Being able to unload has been really nice. I feel like up here the drag scene is much more like a family there is no competition.

Why did you start doing drag?
I think I just wanted an outlet, doing drag allows you to do something after you clock out.  You go home and create something.  Some people are artists on paper, some people do sculpture but drag artists are like that but they just put it on themselves.

What is your inspiration for Vivvi?
She is very punk, I grew up with all of the punk kids, so I’m trying to replicate that. I will go onstage and smash veggies to Taylor Swift or just rock out; there is usually some sort of mess involved.

Where does her name Vivvi the Force come from?
Vivvi is all about life.  I have always loved the letter V it’s for High Voltage a punk band I was in growing up, my middle name Vincent and I love the movie V is for Vendetta so Vivvi cam from those three things.  Force is an acronym for Fuck Order and Resume Chaos Everywhere.  That’s my little catch phrase, that's how you should be, mix things up in the world because things are a little too mellow.  If you’re not pissing someone off your not living.

How do you get inspired for a number?
An idea will come to my head like, it would be really cool to see someone get electrocuted on stage.  So I put together a whole number that’s centered around someone being sentenced to death.  There was a crime at the beginning of the number then there were cop sirens and someone read me my Miranda rights.  I made this electric chair and someone strapped me down to it.  There were electric chair sound effects and every time I got electrocuted the song would change.  I threw in songs with references to electricity and being electrocuted.  It ended with me stealing the gun from the cops and shooting them.  I just get ideas like that and fill them in.

Where did you learn to do drag make-up and hair?
I can’t really do hair, but I have always been good at crafts so I make feather Mohawk headpieces and weird shoulder pad shit.  The way I do make-up is a little different;, it’s a mix of pretty and punk outer space creature.

Do you have any favorite drag places?
Yes, The Stud, Moby Dicks, and Beaux. I like south of Mission its a great place for alternative gay culture.

What is your style inspiration?
Actually Kyle just started coming out.  I took a break from drag for the past couple months to focus on Kyle.  You look like a freak when you’re a drag queen.  I didn't have any eyebrows, and I shaved my head everyday because I superglued Mohawks to my scalp.  Sometimes you’ve got to take it back and focus on your boy side.  Kyle likes to look presentable and incorporates a lot of vintage clothes, punk style, tattoos, and piercing.

What is your favorite neighborhood?
The Mission and Castro are my favorites because you can go from the Mission up through Dolores Park to the Castro and there is stuff to do all throughout.  Shops, vintage stores, things to look at and its the warmest spot in the city.  It’s clean over here, I wouldn't mind sitting on the sidewalk, but in the Tenderloin where I live I wouldn't do that, you’d get MRSA or something.

Do you have people you look up to?
Grace Towers is a big inspiration to me she is doing it big, she is awesome. I look up to the typical San Franciscan who has their network of friends and is just doing their thing.  I look up to the guy who is dressed as the Tin Man breakdancing at Fisherman’s Warf, the people playing drums downtown, the guy selling rum and coke coconuts over in Dolores Park. That’s why I moved here, that’s what makes this city fun. We all are on the same page wanting to have a good time and do something with our lives.  Be the difference and enjoy the journey that’s been my catch phrase for the past year.