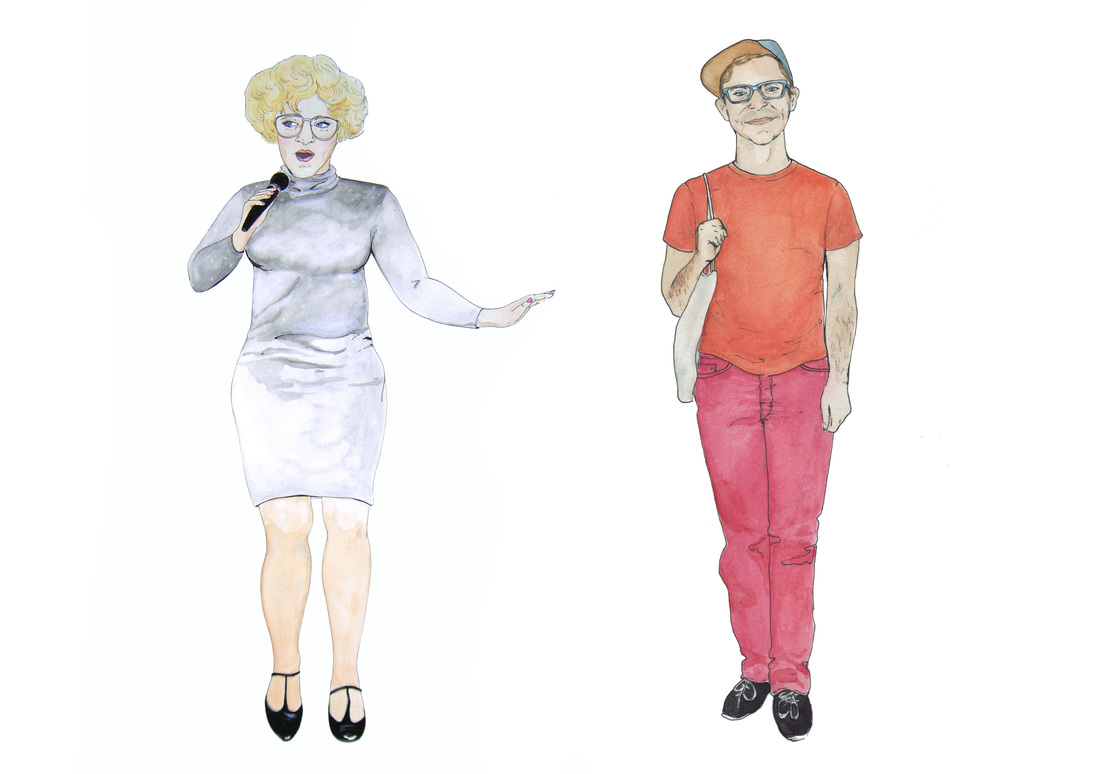 Occupation:
I am a children’s theatre teacher and a working artist and performer. I have made two solo shows in San Francisco in residences, one at The New Conservatory Theatre which was called Pansy, which was very informed by working in the Castro meeting a lot of older men.  There was an intergenerational disconnect that I felt between people who had experienced AIDS and people like myself who hadn’t first hand.  That play was about creating a dialogue about queer identity crossing generational lines.  My second show was called Don’t Feel the Death of Dahmer, about Jeffery Dahmer, which ran at Mama Calizo’s Voice Factory.  That was a queer performance space, and that is no longer around. Martha T. Lipton is my fun theatre character that I do on the side. I approach her much more off the cuff and impulsively which is so different from Evan’s theatre work.


How did Martha come about?
My friend Jamie and I made a comedy show called The Hello Show where we played all of these fictional small town characters. We performed it in coffee shops and bars in Placerville, and neighboring small towns. In it Martha was the town theatre teacher who thought she was this expert but was a little delusional.  My first act I ever did as her was a very dramatic monologue from a Tennessee Williams play.

When I moved to San Francisco I thought it would be fun to bring Martha out as a one-off and then she ended up being a big hit and people wanted her to come back.

Is she modeled after anyone?
The first person was a woman I had met when I was working at a theatre company, she was the godhead of the theatre and she had a breathy voice that was kind of disconnected from her body.  From there Martha has just evolved into this other thing, she’s a lady of a certain age, who is divorced but has something to prove and is trying to show everyone that she’s still got it.

Out in the world in certain circles people know Martha better than they know me. She has taken on a life of her own in the nightlife.  Martha gives me permission to connect with gay men in a way that is socially welcomed.  I suddenly feel like I am embraced in this gay circle as Martha, she’s my outlet for dealing with some of my social anxieties.  I enjoy most of all disappearing into a character and transforming.

I have a background in clowning as well, which plays into Martha too, I do a lot of pratfalls and walking into walls.  A lot of drag is about being flawless but Martha is flawed which makes her more endearing, I like to be the comic relief.  Martha’s whole thing is she is feeling creatively stuck and ignored by the local theatre companies, she just hasn’t been cast in the right roll but she knows that if she did she would rock it out.  She is a total underdog.

When did you do clowning?
When I graduated theatre school I had a clown character named Alvin McGee and I took him to India with a circus company and I also would perform gigs at the Supper Club.  As Alvin I kind of looked like Crispin Glover, I was an awkward uptight character and that was the first character I really disappeared into.  Now I also have Ryhmin’ Ralph which is this white hip hop guy that I play twice a week as part of Dos Rappers Two through a program called Youth Aware to teach kids about HIV and AIDS.  He’s all blinged out but he is a failed rapper who can’t rhyme and needs the kids help to fill in the rhyming words in the rap.  I want to keep that role forever it’s so much fun and I get paid to be a weirdo.

Do you have a drag family?
Downey adopted me as my drag mom.  I was like who is my drag mom, and I was led to Downey, he is so transgressive and irreverent in the drag scene. Every time he’s on stage there is a definite what the fuck is happening.  Which is similar to Martha. Monistat and Ambrosia Salad are my sisters, which is perfect.

Are there people in the city that inspire you?
Glamamore is a huge inspiration to me; I look at her as a vaudevillian, a consummate performer. She is an emblem for the community; she is a lighthouse and inspires so many people. I’m learning about the traditions of drag and I have become much more respectful of that as an art form. No longer am I an actor not a Drag Queen, now I am proud to be a Drag Queen because it connects me to an amazing lineage.

Do you have a favorite drag night?
Something, Friday nights at The Stud is my home that is my number one drag show.  I love that it has both Glamamore residing over the party, she keeps the bar raised high and Vivienne Forevermore gives it a sense of art-school quirkiness that I love.  I like there that I don’t have to lip sync I can just take the microphone and do the hokey pokey or whatever.  There is not a nicer audience is the city.

I love the stud it has so much history, I just saw a picture of Etta James performing there on that same stage! Divine and the Cockettes and even Lady Gaga performed there right before she got big and put her stickers all over the dressing room. Michael the owner was peeling them off and was like who is this lady? And within a week of getting all of them off she was the most famous thing on the planet and he said maybe I should have left one sticker.

Do you have a favorite neighborhood?
I’ve lived in a lot of places in the city.  Thankfully now I am actually on the lease.  I would say the SOMA is my favorite area because I love The Powerhouse, The Stud and The Eagle. The nightlife here has made me feel connected to the city and has given me a sense of lineage and has made me feel like I belong here.  I can go there any night and run into someone I know.  I also appreciate the Castro, I know a lot of old timers there that have so many stories and are really special. It’s interesting, there are so many people there that are still kind of shell shocked from AIDS.  It’s hard for them to even have a dialogue with young people because they just don’t understand.  It’s important to respect that.

What do you love most about the city?
I’m one of those people that really love it here and I’m working five jobs to stay here.  People are like at what point is it not worth it?  They don’t get it; San Francisco is the perfect fit.  I have opportunities here to be myself as an actor and a queer.  I am not alone here there are many people here who have diverse identities and interests.  I’ve had co-teachers of mine come on stage and get topless at The Stud, it’s that kind of city and I love that.

Do you have a favorite San Francisco moment?
Well winning the pageant was amazing and I had zero inkling that I was being considered.  I had a blast I was just so silly and was completely in shock to have won.  Everybody else competing had video projections, background dancers and costume changes on stage. I was really nervous because I just had me, but right before I went on stage I thought I just want to have fun.  When I won there was this six year old girl in the front row jumping up and down she was so excited!

How long have you been doing drag?
I never identified or agreed with male gender roles.  I used to perform as a little kid as Fashion Bear, she was a girl fashion model with a bear mask and I would make my cousin Kerri wear a moustache and be my photographer.  So from the time I was six I was performing as a lady, but a weird lady. That was my version of expressing my femininity.  I remember when my dad told me when I was twelve, because that is how long fashion bear lasted, aren’t you a little old to play fashion bear?  That was devastating and was the first inkling in my very progressive household that maybe it’s not ok to express myself that way.  Martha is absolutely the return of fashion bear.

How does your family feel about you doing drag now?
My parents are absolute sweethearts, when I came out at fourteen and they didn’t know what I needed.  They helped me test out of high school and they had lesbian friends in Sacramento who had an extra bedroom so I lived with them until I was 18 and got my own apartment.  They were trying to give me what I needed.  Now my mom will give me clothes for Martha.  I’ve even dragged her onstage at the Stud.