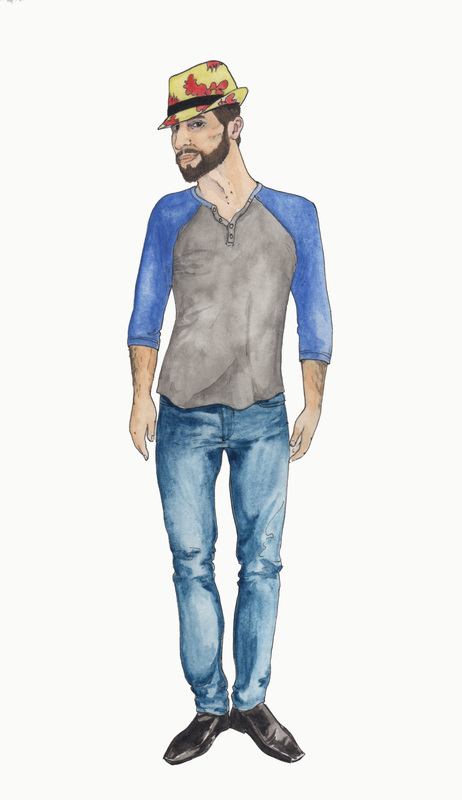 How long have you lived in San Francisco?
It’s been over seven years now. I moved here in January of 2008, I woke up and Heath Ledger had died, I watched Bush’s final State of the Union on the plane here. I came out here and it was the worst economic crisis of the century and I put my eggs in a bunch of baskets, it was a way to make it work in an expensive city.  So I would check IDs on Friday, produce a show on Saturday, DJ at a sex party on Tuesday.  Even now, I bartend on the side.

In San Francisco you will constantly meet people who are self-made. I think SF is used to embracing that bohemian underground entrepreneurial spirit.  It feels easier here than in other cities where that culture is not as common.

How long have you been doing theatre?
I’ve been doing it since I was a child.  I was one of the reindeer in a preschool production and I was like I can fucking do this. So I tried to do a version of Snow White, I borrowed my mother’s ugly bridesmaid dress and enlisted my cousins but they had short attention spans so it didn’t work. I did haunted houses instead.  They were a hit!

I went to a fame high school and ended up winning the 1998 youth playwriting award and my play was produced when I was seventeen.  It was a good milestone in my life because it showed me I could do it.  And for the rest of my life I could say I’m a produced playwright and I never stopped writing. I think playwriting sucks because it’s thankless and makes you vulnerable.  If a play does get produced it takes over a year and it may get cast wrong, be misunderstood and the producers get all of the ticket sales, fun!

So I eliminated the middleman and started self-producing.  I’m still doing what I was doing as a kid, enlisting people for parts. I’m inspired to write when I know its gonna happen.  I’m lucky, I feel like Gilbert and Sullivan in a way because they had the same cast and I have this great team of seven principle players that I could do anything with.  I look forward to my crazy visions coming to life, that’s a great place to be as an artist.  I could never have done any of this without the people that have worked hard, sacrificed and trusted me, I am very grateful.  I’m able to take risks, I put my drag name on it as my pen name, and each show I reach a new milestone. This show I added dinner service I added a pulley system to make someone fly.


Now if I showed up at the desk of a big wig powers-that-be what man and he asked me what makes me think I could do this job, I could slap my portfolio down on his desk and it would make a big sound.  I could say that’s what I’ve self-produced in the last five years.

How many productions have you self-produced?
In the last five years I have done eight officially, but every third one has been a collaboration.  I have collaborated with Veteran Artists, which is an organization in the city, which gives veterans a forum to do some theatrical decompression and explain their experience.  I have done a number of collaborations with Ambrosia Salad, which were just magic. We co- wrote a version of Clue, and she did a drag show, which was formatted as if you were flipping through TV channels, it went from home shopping network to wheel of fortune etc.  Including those things about 12.  8 with the trade mark “Dragsical” in it.  These include: Heathers the Dragsical, Freeway the Dragsical, Alice Some Dragsical Thing, Gollum the Dragsical, Oprah the Dragsical, Clue? The Dragsical, Make Drag Not War the Dragcical Remix, Sisters of the Moon, Batman Is Dead the Dragsical, The Next Element the Dragsical, and Swan Queen the Dragsical.

How long does it take to produce a Dragsical?
Writing takes a month, editing a month and we can produce it in a month, so it can take three months. Projects keep getting more ambitious so 6 moths is a good window. 3-6 months is comfy.

What inspires your plays?
They are all autobiographical or reflective of our collective experience. I have to stress that the actors inspire the characters, I cast the shows first and then I write them to the actors’ strengths.
I have different inspirations each time, for instance when I was doing Batman is Dead, about the lives of the villains after batman is gone I was sleeping in an Occupy tent.  The message behind it was that Batman was the one percent; it was about big brother and the question of weather its acceptable to combat evil by stooping to its level.  It was my frustration with the political situation. The Next Element with The Fifth Element as the skeleton was my fatigue with the impending mystery of apocalypse.  This time, for Swan Queen it was the self-destruction that comes from striving for perfection.

How long have you been doing drag?
I am a drag performer and I say that out of courtesy and respect for drag queens. I started in 2003 as a creative director of a cabaret during college in Madison, Wisconsin.  I had to participate in at least a third of the numbers and there were typically 30 a night. I would come out and be the gondolier or rocket man and hang from the rafters but then I started doing at least one number as a girl. Because of that I became known as a drag queen even though most of my numbers were as a man.  I have never been hung up on gender roles and I embrace my masculinity. When I came to the city I was a seasoned performer and it was quick to find peers who understood my experience. I got to collaborate with some fabulous people.

What is your favorite neighborhood?
SoMa, because in terms of queer places in the city the two top ones are the Castro and Folsom area.  All over the country there are young queer individuals and that b- line it to the Castro and I hope it embraces them.  It has a young sensibility; it’s a historic landmark and a sanctuary for them.  It feels like Folsom is more of where the adults go.

What is your favorite drag night?
I’m very much inspired by how SOME THING on Friday nights at The Stud has organically grown and kept integrity.  The crowd is incredibly intelligent and dynamic.  I like SOME THING  because it’s my style, it’s away from the conventional and you get real artists on the stage.

How has moving here changed you?
It’s given me a lot of opportunities to take risks to learn and grow.

Are there people in the city who inspire you?
Mr. David Glamamore, I admire him so much for his unparalleled stamina, his artistic sensibility, his eye, his breadth of experience, and his depth as a human being.  He reassures me that I can confidently embrace a bohemian alternative artistic life and that choice is worth it.  He was on the gender fringe when they were still finding drag queens in dumpsters in New York City.  Confidently I can say he’s a genius and I am grateful to have witnessed his greatness.

Where did you get your drag name?
The cabaret was full of all these drag names; there was Honey Lingus, Clitsy Normous, and Mr. Pickles.  Every time I did drag they would invent a new drag name for me, some only lasted a week, and Drama Bin Laden just stuck.  It was 2003 and that was all really relevant.  Drama is theatre, and Bin Laden is a last name that has the connotation that shit storm is present.  Now with the death of Osama Bin Laden, other than the three widows I am one of the most famous Bin Ladens.

How do you fund your shows?
I have not done a single fundraiser, or gotten a single grant.  Our first show cost $68.  I know how much everything is going to cost and I plan ahead and save up.  I have bankrolled all of them.  It pays me back in a lot of ways, my visions come to life and that’s satisfying enough even if I don’t get all of my money back.  Our financial model is cooperative; I get paid the same as everyone else.  We get to do something that we are good at and get compensated well for it.