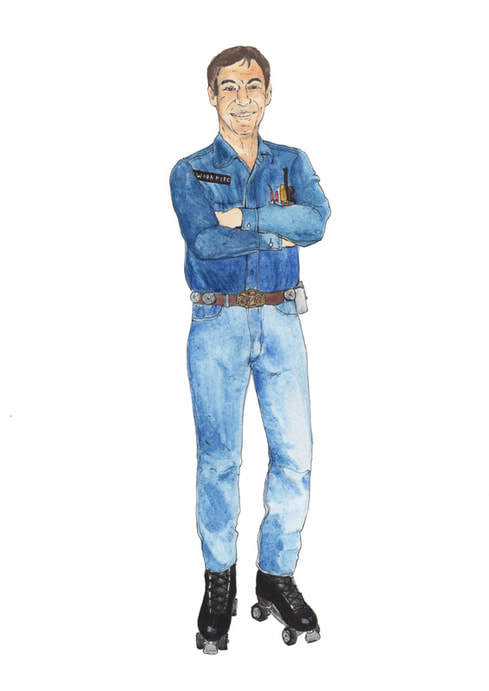 How long have you been working at the Musee Mecanique?
All my life, my dad started this collection of arcade games in the basement at home before I was born so I’ve just kind of grown up with it.  The first location, other than our house was in Tiburon.  That was cool.  All of the old stuff back then was kind of new so you could still find parts.


How did your Dad start his collection?
Inadvertently, when he was 11 he was in a school night bingo game and he won.  That gave him the opportunity to go on the school stage where they had the wheel of fortune and see if he could win the grand prize.  He spun the wheel and it landed on the grand prize and Dad was stoked! He won a case of oil which at 11 years old he could not have cared less about. So he took the oil home and sold it to his piano teacher for 50 cents.  Then he took the money to a store that used to be on Ellis Street that sold coin operated machines.  He bought a really tiny one for 50 cents called the Whirlwind that operated on pennies.  He took it home and his Mom and Dad and friends put pennies in it and he soon had another 50 cents and went out and bought another machine and then another one and then look what happened holy moly it kind of grew!  Now we have over 200 arcade games!

Where did he keep his collection?
From what I remember there were machines all over the house but especially in the basement; he would tinker down there for hours.  At the entrance were these old wooden hinged saloon doors and inside there were several pianos and tons of old games and tiffany everything, it was really magical. You don’t realize how special things are when you’re around them all the time but you can go your whole life searching for that same magic and never find it.  It’s all in private collections now. The arcade was in full swing during birthday parties and cocktail parties it was really fun.

Why do you roller-skate at work?
I always skate at work but skating to work is a different story, I’ll never do that again!  I skated from my house in Marin County to the Musee; skated all day long and back.  You go up the hills very slowly and you go down the hills faster than you want to.  I went through a whole set of brakes that day.  It was intense; I won’t do that again.  I started skating here full time in1975.  I actually started off on a skateboard in the arcade.  While I was fixing a machine one day someone stole the skateboard so I thought they can’t steal roller skates out from under me and I started roller-skating.  But I didn’t know how to roller skate at all, I got to work and put on my new skates and someone needed something at the other end of the arcade.   I swear to goodness I was grabbing onto every machine and countertop just trying to get to the other end of the arcade.  But in about three days I was just blasting up and down. Skating is a time saver getting around here. I’m taller and makes it easier to dust and its just fun. To be able to get away with skating at work is just amazing!

Can you do some cool tricks on skates?
None whatsoever just staying vertical is my goal.  I mean I can do things like go up ladders on skates, I can run up a flight of stairs, I’ve chased people down and I’ve caught them.  I had to pick up a couple of people for various reasons; I just do my job on skates.


Do you have many interesting customers?
Yes all of the time!  One that stands out was this 70-year-old woman.  We used to have a photo booth that used old Polaroid film that developed right in front of you.   I watched this woman go to grab her photo from the machine but she did it in such a weird way so that when she pulled out the photo the black backside was facing up.  I figured that she would figure it out and flip it over, but sure enough a couple of minutes later I hear a knock on the door and she is there informing me that my machine is broken.  I told her you are going to hate this but… and then I turned the photo over and there was her photo in perfect condition.  She was so embarrassed but I reassured her I wouldn’t tell anybody.

There was this other time when I was working on an old golf game.  I had it taken apart just as much as possible.  The cabinet doors were off and all of the mechanisms were taken apart.  I was looking on the camera from the office and I see this woman in front of the disassembled machine trying to figure out where to put the coins in and I figure she will figure it out and move on.  But in a couple of minutes I hear my bell ring.  She is outside the door telling me that my machine doesn’t work.  She had just chucked her nickel into the machine as if it was a wishing well and expected it to start to work.  I told her that I was sorry but I was in the middle of repairing the machine and I gave her a refund.

Is there any game that stands out in your memory?
Yes, I used to love this speed racer slot car game.  I remember one day after school heading over to the arcade in Tiburon to play that game and discovering that it was gone.  I went to my Dad and asked where the game was and he said he had traded it, so matter of fact.  I was devastated, I loved that game it was just so fun!  Then about three months ago I was in Marin getting a part for another machine from a woman and asked if she had any other games.  She said that she had just sold and shipped out the whole collection except for one.  I asked her which game she had and she said it was the slot car speed racer game!  I could not contain my excitement I was doing mental cartwheels and air hugs! I had been looking for this game for the past 50 years!  Then she told me that a man had just bought it a couple of days earlier, but he never came to pick it up.  It happened to be in her living room so I bought it and am currently working on it to get it up and running.  Its beautiful from 1963, with original hand painted siding and pristine back glass.

Did you go to Playland growing up?
I went almost every weekend because my dad knew the owner of Playland. They would have lunch together at least once a week and I would tag along.  They wanted to get rid of me so he would give me a free pass to all the rides and roller coasters at Playland.  That was not a problem, it was pretty cool.  I used to love hanging out underneath the Ferris wheel because when they would put the breaks on the cars up in the air it would tip upside down and all of the change in the riders pockets would fall out.  Then I would go run under and collect the coins and go back to the arcade.  I loved to play in the long range shooting gallery, they had a pond with ducks floating it in and when they were hit they would clang, whirl and ding.  It was pretty fun.


How did you meet your wife?
She was working in a used book store in Tiburon a couple doors down from where I was working and I needed a book that was really expensive so I decided to see if they had it in the used books store for cheaper.  The moment I walked in she was there behind the counter and her head was down and she was wearing this long skirt and I knew even without really seeing her face that if I talked to her it would be marriage and babies.  I wasn’t ready for that so I made it really brief and asked for the book.  She said she didn’t have it but I should check back in a week to see if it comes in.  A week later I came back and she still didn’t have the book but we sat and talked outside of the store in the sun and it was like we were old buddies, it was so comfortable.  After a while I asked her out and she said ok and that was the best ok I’ve have ever got.

She is a retired PHD Nero Physicist.  She was teaching at Yale by the age of 22 and then devoted the rest of her career to doing research.  Now she is really into cooking so I am very happy.  We have two sons, one is living at home and the other is studying up north.  They like coming into the arcade but I always put them to work so I’m sure that takes some of the fun out of it.  At least they make a little money, $2 an hour sure adds up fast! Just kidding.

Do you have a favorite place in the city?
I love the Conservatory of Flowers; it’s the opposite of a migraine.  I used to go there once a week after school to do my homework.  It’s so nice and quite and warm in there.  I don’t make it there quite so often anymore but I still love it.