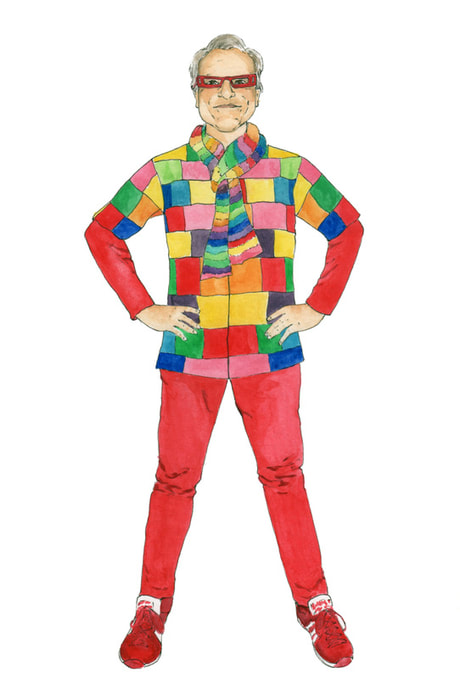 What brought you here?
Greyhound. I was coming from the Midwest where as a young adult I started feeling myself out as a gay person.  I had some very important guides including magazine articles.  In the early 70’s Life Magazine did a piece on gays in America that was written like a scare tactic to keep people away from the degenerate cities.  But it also inadvertently showed gay people where to go to find others like themselves.  Because of this article so many gay people moved to LA, San Francisco, and New York.

In October ‘78 I watched the gay documentary “The Word is Out”, that same month I moved to San Francisco.  Recently I went to a re-screening of the movie at the Castro and I told the filmmakers during the Q and A that when I was in Minneapolis in 1978 I watched your film and prayed and dreamed of a life as fabulous as the one you portrayed.  Then I came to San Francisco and started coming in contact and becoming friends with the people in your movie.  Your film and my life, oh my god!

What was the city like when you moved here?
It was a different kind of world here; one of the freedoms that we won at that time was the freedom of sexual expression.  Bathhouses became these wonderful places of sexual freedom.

What was the gay community involved in when you moved here?
Well the Gay Olympics in 1982 started by Tom Waddell was awesome, the first one was held at Kezar.  I was dismissive of the gay games I thought it was stupid because I’m not into sports.  But I went and it was really exciting, fun and supportive. We all waited and cheered for every last person.

In the late eighties there were 3 or 4 body building events for the gay and lesbian community. Even the gay and lesbian body building competition was very gendered.  The second year I decided to compete.  One woman and I were the only people to cross the gender boundaries.  My hair was spiked up and I went on stage with red ruby and diamond drop earrings, red lipstick and red fingernails.   I performed a whole traditional female posing routine to the song called “I Wish I Was a Princess” from the original Hairspray.  I had someone get mad at me over this!  At Mission High School people were cheering and cat calling and I got the sense from the vast majority of the audience that I was bringing joy to them at a time when life in San Francisco was extremely rough.   We were finding out that our friends, boyfriends and brothers had AIDS and for 90 seconds I was making 600 people happy, they weren’t thinking about AIDS and they were laughing and enjoying themselves.

When did you start making costumes?
The costuming in part comes out of something that Harry Hay said.  He felt it was important that when he walked down the street people knew he was gay.  Based on this statement I started doing more dressing up and overshot my target, people don’t use the word gay when describing me they use the acronym, happy.

How did you get involved with the Radical Faeries?
Someone off the street invited me to be a part of Faetopia.  Through it I suddenly became introduced to the rest of the Radical Faerie family even though I started hanging out with Harry Hay and John Burnside (the two men started the radical faeries) back in ‘94.   I was a part of Faetopia’s runway show and the announcer introduced me as Kaleidoscope (my burning man / radical faerie name) the person that killed Harry Hay.

I did put Harry Hay into intensive care. He was 89 and I kissed him like I always did but I had a bug.  Our tradition of kissing started way back when he slipped me tongue once in Los Angeles and I didn’t know how to respond to this older man kissing me.  I thought about it a lot and the next time I saw him I told him I want to apologize for my lack of reciprocation and I really made out with him.  From then on every time I saw him we would kiss.  After the intensive care incident I no longer kissed Harry and once when I saw John Burnside he told me Harry really misses your sweet kisses.