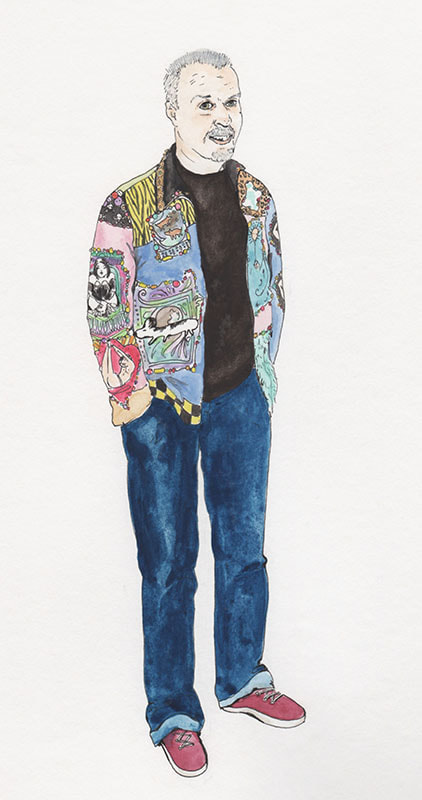 When did you move to San Francsico?
I moved here in the fall of ‘69.  I was living in Los Angeles with my good friends (all Cockettes) Sylvester, Reggie, Dusty Dawn, Goldie Glitters. I was a Go-go boy at Whisky A Go Go.  It was fun, it was before any of the actors had bodyguards or gates in front of their houses so I met many movie stars.  I met Mickey Rooney, Tarzan, Nat King Cole, Frank Zappa, The Monkees, Davy Jones. The monkeys got a hold of all this hair from a hairdresser and they hired 6 of us to put hair in little baggies and they sold it to fans as locks of Davy Jones Hair.

I just lived in LA for four years and it became a police state, I got busted 3 times. It was when the strip was going on and it got outta hand. Everyone was on acid in the street and to clean up the city for the tourists and they started busting everybody.  It just wasn’t fun anymore, you couldn’t even hitchhike, it was illegal.

What was it like when you first moved here?
We would go from this gay bar called the Capri bar on upper Grant Ave, which was across the street from the Palace Theatre and one of the bartenders, Mavis was also one of the original Cockettes.  Before the Cockettes appeared at the Palace Theatre they had midnight movies, crazy movies, and we would all go there from the bar for the movies and then the Cockettes started performing there and the crowds got so massive. I only performed with the Cockettes once but I worked on sets and costumes.

How did your fashion career begin?
I went to Los Angeles with my first bunch of clothes and that’s when I sold to the Rolling Stones.  My clothes were in this store’s front window across the street from their recording and publicity agency.  When they booked their tour they saw the clothes in the window.  Then the store called me and told me to come and pick up the clothes and take them to a house in the Hollywood Hills and we went and met Mick Jagger and sold him the whole bunch.

From there I went to New York where I was staying with The Cockettes in this cheap little hotel and I met this woman through another artist friend who became my manager.  She had gobs of money and the gift of gab and would get her foot into any door; she got me into all of the magazines and sold my clothes to Aerosmith, Led Zeppelin, Alice Cooper, Edgar Winter and lots of other groups of people.

I once made a white leather cape with stuffed white rats being eaten by lacquered black bats for Alice Cooper that was stolen by Salvador Dali. Dali was painting Cooper and when he finished painting him took the cape.  In ‘73 Playboy magazine called me their international designer of the year, that’s when my family decided I was ok.

I only stayed in New York for about a year, I couldn’t take it anymore and I moved back to San Francisco and joined the Angels of Light, but I still sold clothes through my manager.  We did business over the phone for about a year and then she went crazy and burnt down her house.  She did way too much cocaine but without her none of this would have happened.

What are themes that inspire your work?
I’ve always been interested in pop culture, famous people like Anna Nicole Smith and big headlines like murders and hurricanes.  When I was in New York I was surrounded by artists; all of my beading and buttons came from this artist Ken Tisa, now he’s famous and works all over the world.  My photos have come from me really liking photographic material and living in crazy gay culture.

What is your favorite neighborhood?
Market street just cuz it’s degenerate.  I just feel comfortable with it and it’s the perfect location in the city. It’s easy because it’s got all the busses and BART plus I can walk to the craft store, the Mission, the Castro and the bead store south of market.

What is your favorite event in the city?
Now I think it’s the Trans March and the Leather Walk, it used to be the Folsom Fair but that was five, ten years ago now you see people with baby carriages there. I still like Gay Pride, especially the section called The Fairy Freedom Village.

Who in the area inspires you?
Mrs. Vera, Carl with Records, Diego Gomez (one of the Thrill Peddlers), Ben Wa, he’s a great videographer, Rumi Missabu, and Tahara he’s the remaining angel and so talented it’s just shocking.

How do you feel about the current changes in the city?
I don’t care.  I think it’s great, the more money the better.  It’s awful about the rent but it comes along with everything else.

Is your housing secure?
Yes, I live in the only building like it in all of the United States, it’s run by Catholic Charities and you have to be HIV positive to qualify. I have a 2 bedroom 2 bath, no electricity and no utilities bills and I pay $265 a month.  Plus they have free food on Thursdays, free tickets to the movies, free tickets to Cirque du Sole, free this free that.  I’ve been living here 10-12 years maybe. There are a lot of characters that have lived here, but they die like crazy.  There’s probably 6 or 8 trans people and about 10 drag queens, it’s a healthy mix.  There was a big problem with drugs, speed especially but they have tightened up security.  I couldn’t afford to live in the city otherwise.

Now where do you find your clients?
By word of mouth basically,  I just sold a jacket to the Center for Sex and Culture about Alan Selby who founded Mr. S Leather Shop, also known as “The Mayor of Folsom Street”.  I hardly have shows because it’s hard to get galleries.  I would love to do the windows of Cliff’s Variety it’s perfect, it could showcase the materials I buy there and would be a great place for people to see my clothes on the street.  I’ve been going there since the Cockettes.  They had the best lace and that’s where we got most of our glitter, it’s the same family that owns it.

What else have you been working on?
This last year I have been working with a writer on a book about my life.  It’s gonna cover my childhood growing up in Texas, my time in Los Angeles, Florida, New Orleans, New York and here all the way up to today.

You can see Bill’s work at at Billbowersart.com